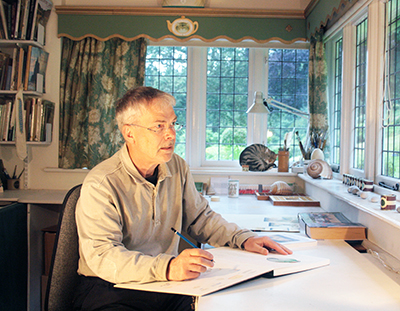 Peter Cross was born in Guildford, Surrey, in 1951. He trained as a Technical Illustrator at Hawker Siddeley, but soon set up his own studio and from 1975 began to emerge as an imaginative illustrator of great originality. From 1977 he produced the artwork for a number of albums by Anthony Phillips, the former Genesis guitarist.

He made his name with eleven children’s books which delighted children and parents alike with their humorous detail. These include the cult classic ‘Trouble for Trumpets’ (1982), the series ‘Dinosaur Days’ (1985) and ‘The Adventures of Dudley Dormouse’ (1986-87). Subsequently, he responded directly to adults’ interest in his work by producing the hilarious updated histories ‘1588 and All This…’(1988) and ‘The Boys’ Own Battle of Britain’ (1990).

Unwilling to restrict his fertile imagination to two dimensions, he also created a series of boxes, or eccentric cabinets of curiosities, centring on various themes including Sigmund Freud and the Cheltenham Literary Festival. Such richness and diversity were then directed towards advertising and, in particular, to inspired work for Wine Rack. From 1991 to 1994 his illustrations to the Wine Rack catalogues gave them a distinctive boost in their award-winning years.

In the mid 1990’s, Peter Cross changed the look of the greetings card market. Introduced to the industry by Andrew Brownsword, his iconic ‘Harbottle & Co’ die-cut cards reached a wide international public and became phenomenally successful for Gordon Fraser (Hallmark UK). More recently he has enjoyed further success with his signature ‘Peter Cross’ range, first published by The Great British Card Company in 2007.

The meticulous, detailed images that have made Cross a cult name are now increasingly accompanied by broader, more painterly views, while his wide knowledge of art history not only continues to inform his repertoire of allusion but assists his work in the genres of portraiture and landscape. Always looking at ways to refresh and further his talents, he remains one of this county’s most original artists and illustrators.

Peter has exhibited regularly since 1988 at Chris Beetles Gallery in St James’s.